First of all, yes, each of the above will be referenced in this article, and not just for the fun of it. (Although partly for the fun of it.) Second of all, this is an article about aligning marketing and sales teams. Why do they need to be aligned? Because marketing and sales teams being unaligned has multiple negative consequences, including causing internal tensions and lost opportunities, and will ultimately affect a business’s bottom line.

So how do marketing and sales teams become unaligned? For one thing, they may use different communication styles and be focused on different goals and objectives. For another, research has proven that it takes almost nothing for people to split into opposing, even hostile groups. Don’t believe me? Let’s back this up with some evidence, which happens to include a story about sixty-four schoolboys.

What Sixty-four Schoolboys Can Tell Us About Group Prejudice

In 2020, Ezra Klein, a New York Times journalist and co-founder of news website Vox, published his non-fiction debut Why We’re Polarized. The book is an excellent analysis of polarization in the US political system—it’s well worth a read unless you think it’d depress you too much. In any case, there’s one section of the book which is applicable beyond politics. It focuses on the work of a social psychologist named Henri Tajfel.

Born in 1919, Tajfel was a Polish Jew who emigrated to France in the 1930s, joined the French army in 1939, and from 1940 to 1945, was a German prisoner of war. When Tajfel returned to France in the aftermath of World War II, he found that most of the people he’d known, including his family, had been killed because they were Jewish. As Klein writes, ‘It is not hard to understand why a man who endured this era, who survived only by slipping into an identity that was not his own, would find himself obsessing over group identity.’

Tajfel subsequently came up with a truly shocking theory about the unreasonableness of group prejudice. Klein explains it like this:

The instinct to view our own with favor and outsiders with hostility is so deeply learned that it operates independently of any reason to treat social relations as a competition. […] Once we have classified them as, well, “them,” that is enough—we will find ourselves inclined to treat them skeptically, even hostilely, because that is what we are used to doing with anyone we see as a “them.” It’s an automatic response, like the gooseflesh that rises on your arm in reaction to the cold.

To prove this theory, Tajfel conducted an experiment which, Klein notes, ‘would be farcical were the results not so chilling’. The subjects of the experiment were sixty-four boys from the same school, all aged fourteen or fifteen. Tajfel wanted to divide his subjects into two groups, so the boys were all shown clusters of dots on a screen and asked to guess how many there were. The boys were then told that they’d been split up based on whether they’d guessed high or low but in truth, the researchers just did it at random. For the next stage of the experiment, each boy was given a limited amount of money, which they were told to hand out to other boys. The result, incredibly, was that ‘a large majority’ of the boys gave more money to members of their own group.

Sixty-four boys, all from the same school, were brought into a lab and sorted into groups based on a meaningless characteristic—how accurately they estimated dots on a screen—that wasn’t even true. Then they were moved into a different study that had nothing to do with dots at all, where they were giving away money, none of which they would ever get. It was the lightest test of group identity possible.

And yet it worked. Simply because they were told they were different—just once, by a few strangers—the boys retreated to their silos and acted accordingly.

The Elves and Dwarves United by A Common Goal

Which is how we get onto elves and dwarves. Now, if you’re not a fan of the Lord of the Rings movies—or if you quite liked the first one but eventually got sick of the whole thing—don’t worry. The upcoming metaphor won’t get into nerdy detail. Suffice it to say that, in the Lord of the Rings, there are elves and dwarves, two different tribes with two different histories and cultures, and, in short, they hate each other and always have. However, what makes The Lord of the Rings an uplifting Hollywood movie is that the elves and the dwarves ultimately come together, in a spirit of brotherhood, to achieve their common goal of helping Frodo to destroy the One Ring and save Middle-earth. 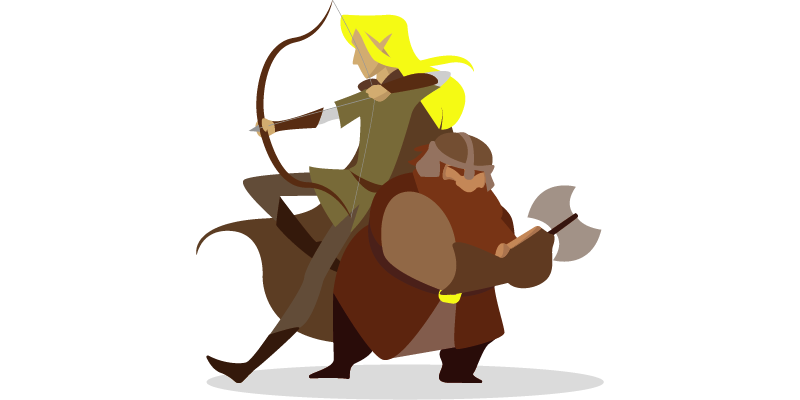 Now, marketing and sales teams will have to decide among themselves which of them are the elegant elves and which are the dumpy dwarves—I’m kidding, of course. In fact, this whole metaphor shouldn’t be taken too seriously. Marketing and sales teams don’t hate each other like those elves and dwarves, nor are they as different as two different species. But, as Tajfel’s experiment revealed, people can become divided over the absolute silliest little thing. Given that this is the case, marketing and sales teams need to make sure that they don’t get bogged down in their differences, real or perceived, and instead stay focused on their businesses if you will, ‘One Ring’. Put another way, they need to recognize tribal instincts as unproductive and align themselves in order to achieve common goals.

Let’s now drill down into how sales and marketing teams can better align themselves and what the tangible benefits will be for their business.

One good way to close the communication gap between marketing and sales teams is to close the physical gap. In other words, marketing and sales employees should share a workspace (or, for remote workers, share a chat group) and feel that they can communicate with each other whenever necessary. As a result, all employees will better understand each stage of the process that starts with lead generation and ends in a sale, making that process more likely to be a successful one.

Don’t allow a culture in which every new problem leads to marketing employees blaming sales employees behind their backs or vice versa. The better marketing and sales employees communicate, the more effectively they will be able to solve problems together. This, in turn, will mean that those problems do not have to be solved by their managers. Don’t let managers waste time on problems that their employees can solve themselves. The more time a manager has to focus on their own duties, the less time, money and opportunities a business will ultimately waste. Employees will also be contributing towards fostering a warmer, more collegial workplace. In such an environment, employee retention rates are likely to increase.

Marketing and sales teams should all broadly agree on the language used to talk about their shared tasks. What constitutes a good, solid ‘lead’, and what constitutes a genuine effort to make a sale? Of course, there aren’t any hard and fast rules here. There’s that infamous line on obscenity from US Supreme Court Justice Potter Stewart: ‘I know it when I see it.’ But that doesn’t mean sales and marketing teams shouldn’t make an effort to understand each other in good faith. It’s better for colleagues to partially understand each other than not to understand each other at all. Customers and prospects will have much more confidence and trust in a business whose employees are all speaking the same language.

So, there we are. Get sales and marketing teams acting less like schoolboys and more like elves and dwarves and your business will reap the rewards.

Probably not out loud, though. Or, if someone does hear you, well, I guess you’ll just have to send them a link to this article to explain…

Back to Insights
marketing articles

We help B2B industrial leaders just like you to generate the marketing outcomes they’ve always dreamed about. We'd love to talk about how we can help you grow your business and increase your sales through account-based marketing.

Would you like to receive digital marketing insights, thoughts, and strategies to your inbox? Don't worry, we won’t spam you with daily lengthy newsletters. We like to keep it short and sweet, with content that is valuable to you and your business.

Your message has been sent!

Your message has successfully been sent, you will receive a response between 3-5 business days.